Albanian food, with some notable differences, is similar to much of the food in other Balkan countries.

The country’s cuisine is Mediterranean, with influences from Italian, Greek and Turkish cooking. The dishes make heavy use of what is seasonal and available, and nearly every Albanian recipe contains vegetables of some sort.

I’ll start this post the way most Albanians start their day: with coffee. 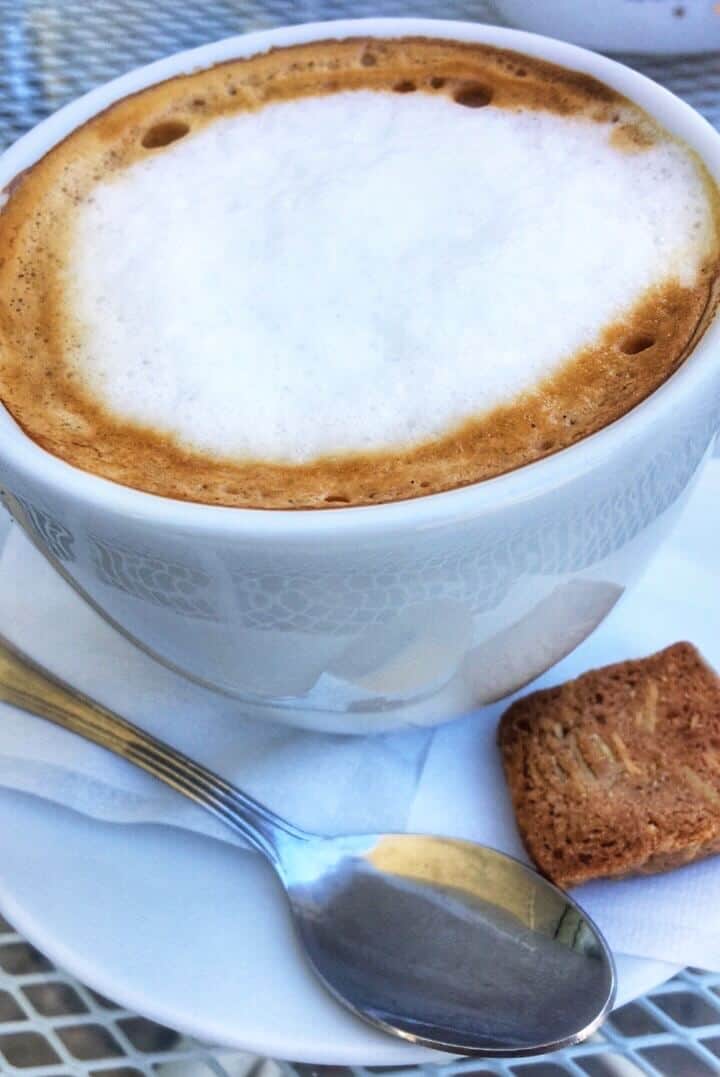 Albania has a serious coffee culture almost unlike anywhere else I’ve been. I would say Albanians take their coffee about as seriously as the Turkish do their tea. At all hours of the day, you can find Albanians sitting in cafes, sipping coffee and socializing.

And you can’t just quickly drink a cup and move on. You sit, you chat, and you do not rush or hurry. This is a huge part of Albanian culture and should be given due respect. And, at about .50 USD per cup, it’s no wonder why enjoying a cup is a popular way Albanians pass time.

One of my favorite finds during my time in Albania was pispili– Albanian cornbread with leeks. 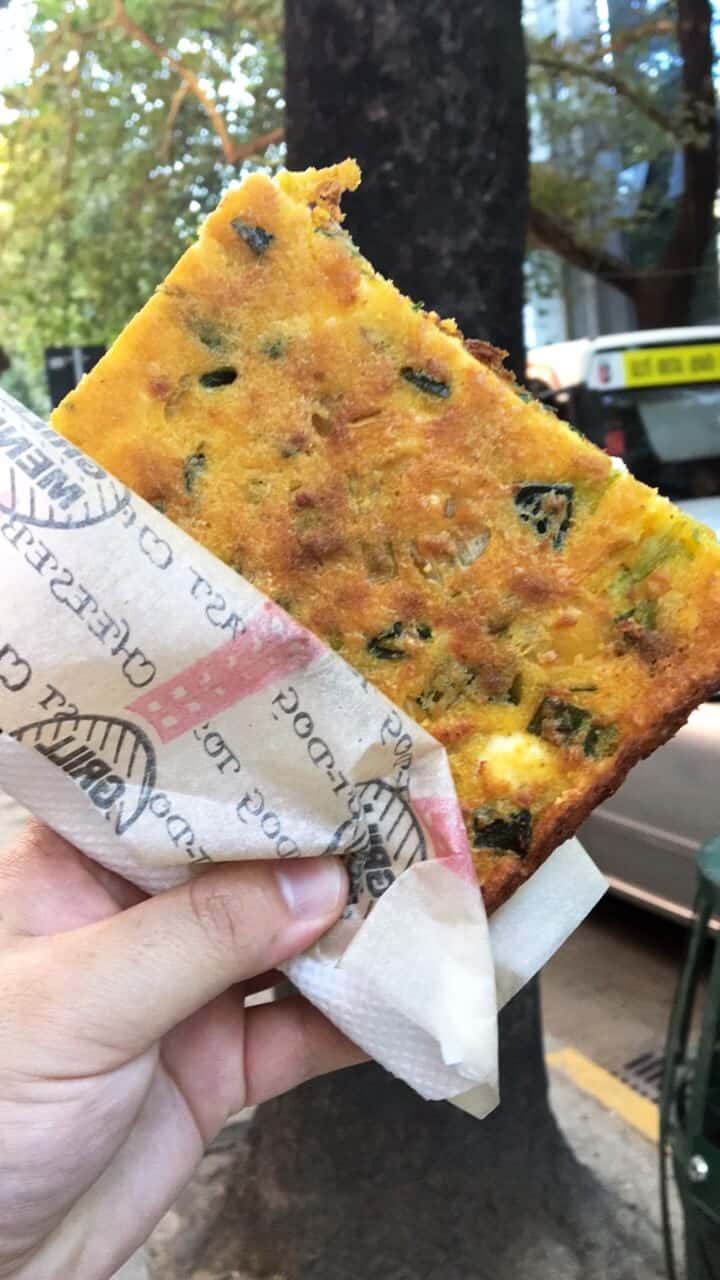 I found this at a street food stall and had to try it. It’s delicious and quite filling. I wasn’t much in the mood for dinner later that night. I actually prefer it over the cornbread from back home- the leeks really make this dish. The best part- this only set me back about .40 USD

I know it sounds weird to recommend a salad, but trust me- this one is delicious. 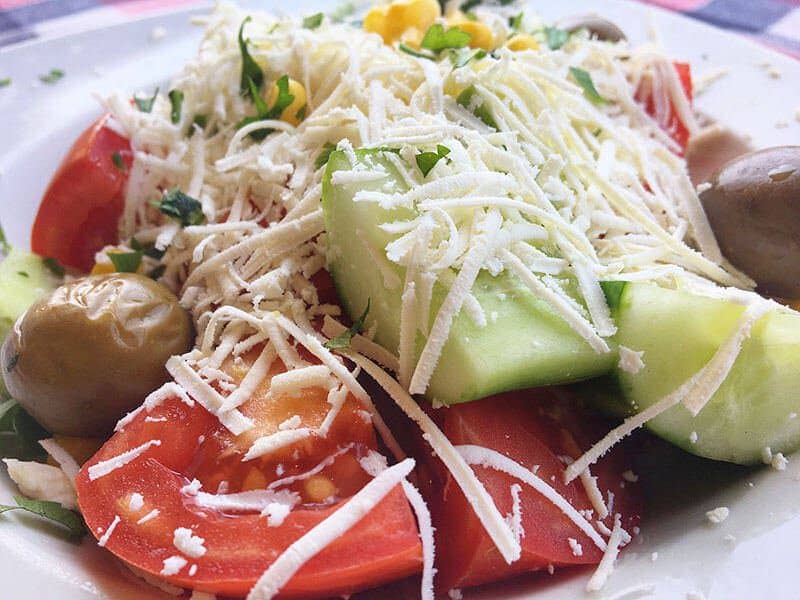 Albania’s most popular summer salad is this simple tomato, cucumber, and cheese salad. It’s sometimes served with olives, sometimes with corn or onions, but always with cucumber, tomato and cheese.

You can dress your salad with olive oil, salt and pepper, and sometimes a squeeze or lemon or a bit of vinegar, but I prefer mine with only olive oil. When the ingredients are this fresh not much else is needed.

Before trying this salad, I didn’t really care for cucumber, but enjoying some version of this salad all summer has won me over.

Kaçkavall (or kashkavall) can be found, in one way or another, all over the Balkans. 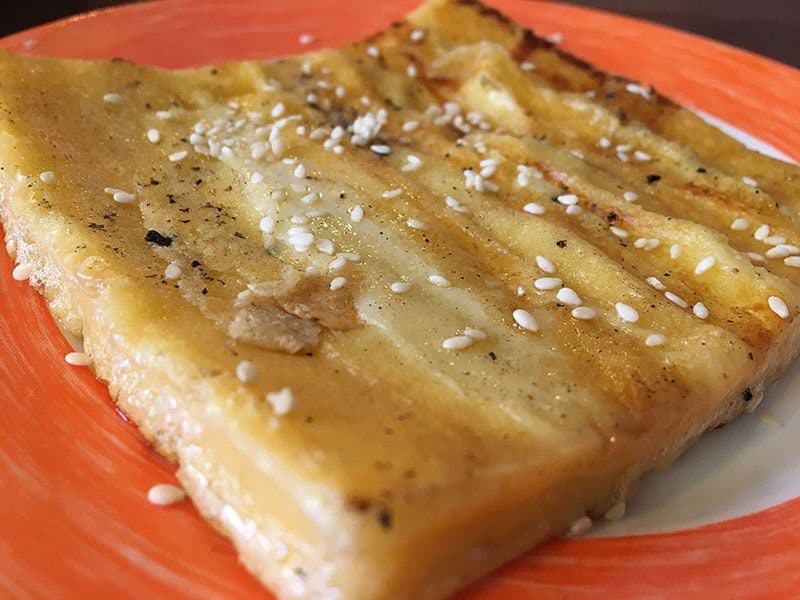 The term is often used generically to describe yellow cheese, but in this instance, it refers to pan-fried cheese. Definitely not the healthiest option on the menu, but one of the most delicious for sure.

The cheese is salty, and when fried, it’s melty and delicious and goes really well with beer!

You cannot talk about Albanian food without mentioning byrek (burek or börek). 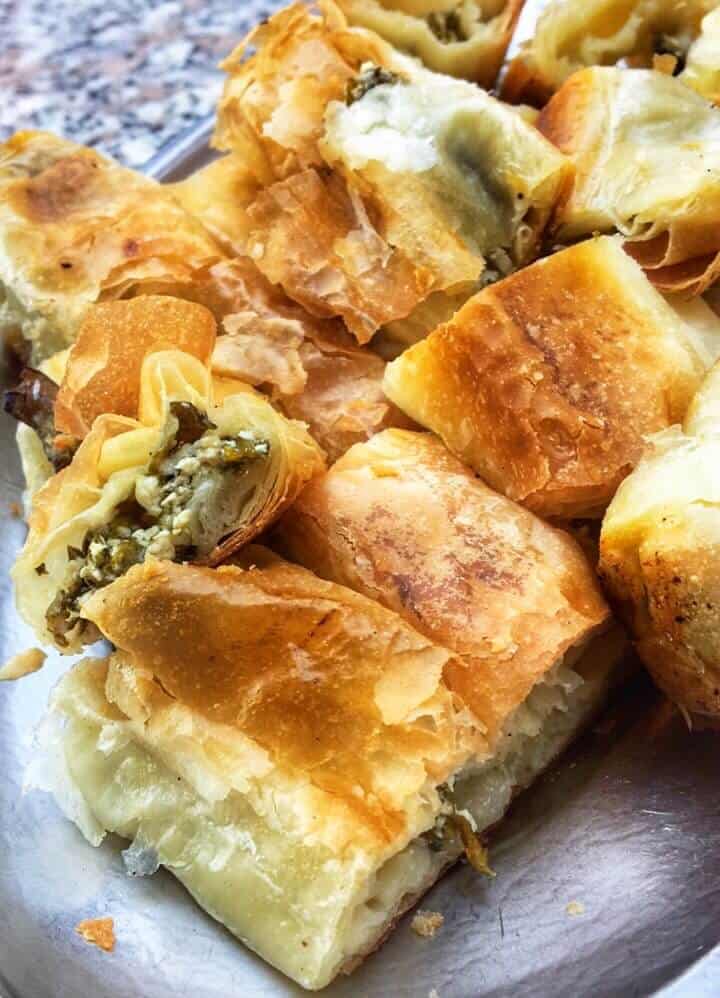 Another dish you can find some version of all over the Balkans, byrek is baked filled pastry that can be filled with any number of ingredients. The dough is a thin, flaky phyllo dough.

In Albania, byrek is typically filled with spinach and cheese or minced meat. This very typical breakfast is often drank with ayran, a salty yogurt drink.

Byrek is very delicious, but to me it is a bit too oily for a breakfast food. Still, it is perhaps the most popular breakfast I saw locals enjoying.

If you want to try a very local dish but also only for adventurous eaters, paçe koke is a must try. 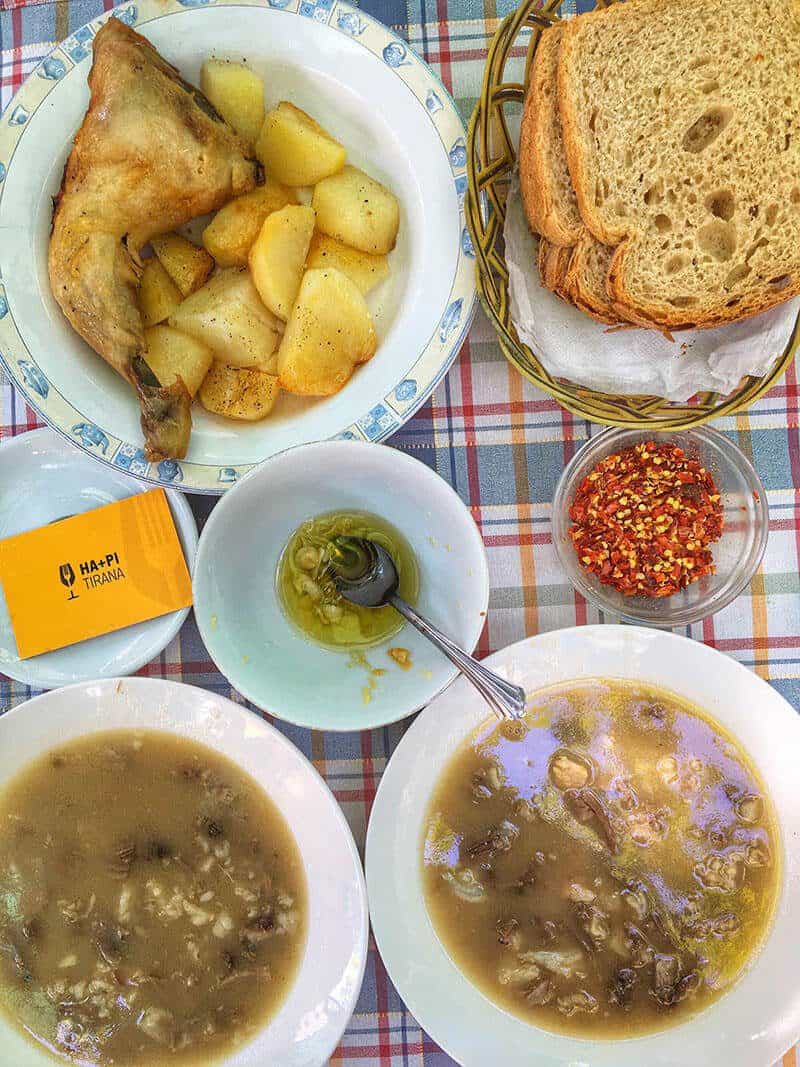 Paçe koke, pictured at the bottom of the above photo, is a soup made from meat of the head of a lamb or cow. Essentially, it’s Albanian head meat soup, and it’s delicious.

I tried it with a friend one morning, and while I happily finished my bowl, not only did he finish his own bowl by scraping off the leftovers with his bread, he also did the same with mine.

The soup reminds you of a stew your grandmother might make. The broth is thick and filling, and the fatty pieces of meat are perfectly tender.

These bowls were served with chili flakes and garlic oil, which apparently isn’t typical, but I found them to be welcome additions.

Don’t let the description put you off- this dish is actually delicious, so delicious that I had it several more times during my stay in the country.

In more touristic areas, I saw the soup for as much as $3 USD, but in neighborhood restaurants I tried it at a cost of $1 a bowl.

Qofte is one of my favorite local dishes, and I couldn’t tell you how many times I’ve had it. These seasoned grilled meatballs are generally served with raw onion and bread. 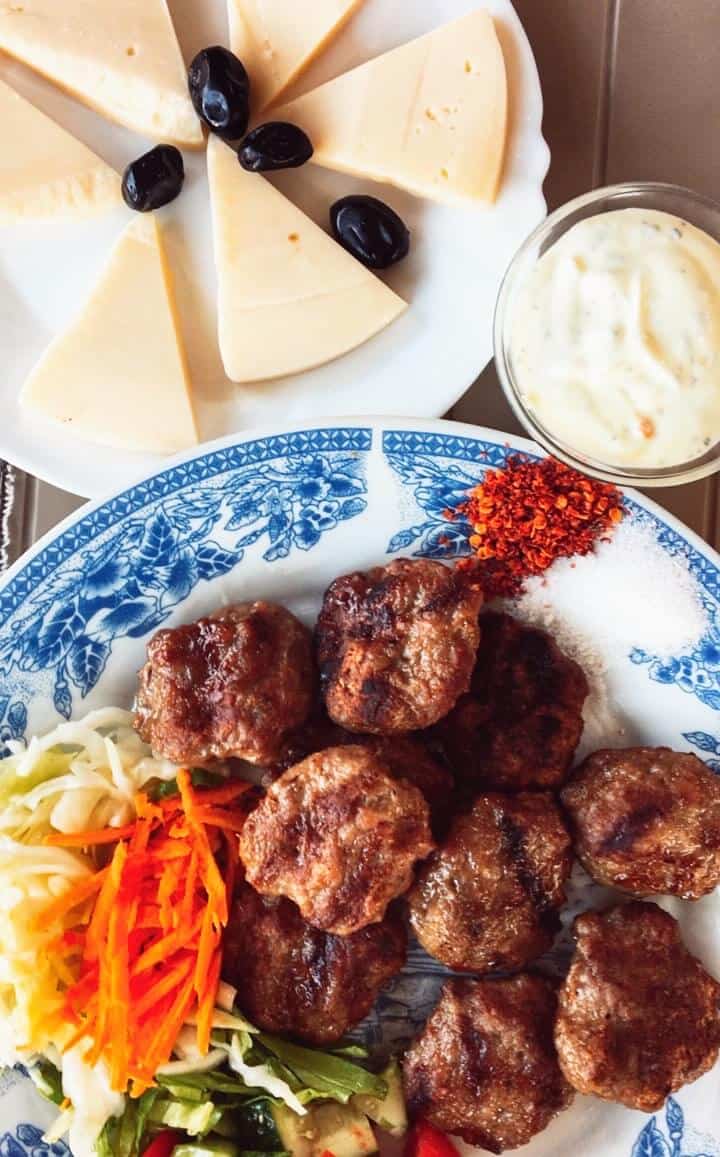 Depending on where you try them, qofte can be made from lamb, pork, beef or some combination thereof. In Albania, the meatballs are usually a mixture of beef and lamb. These reminded me of mici, which I had when I was in Romania sampling Romanian food.

I liked ordering it with onion and fresh cheese and stuffing it inside some bread to make a sandwich. You can always tell when there’s a shop in the neighborhood serving qofte, because the smell of grilled meat will find you before you find it!

Speaking of bread, I love Albanian bread, or simite. 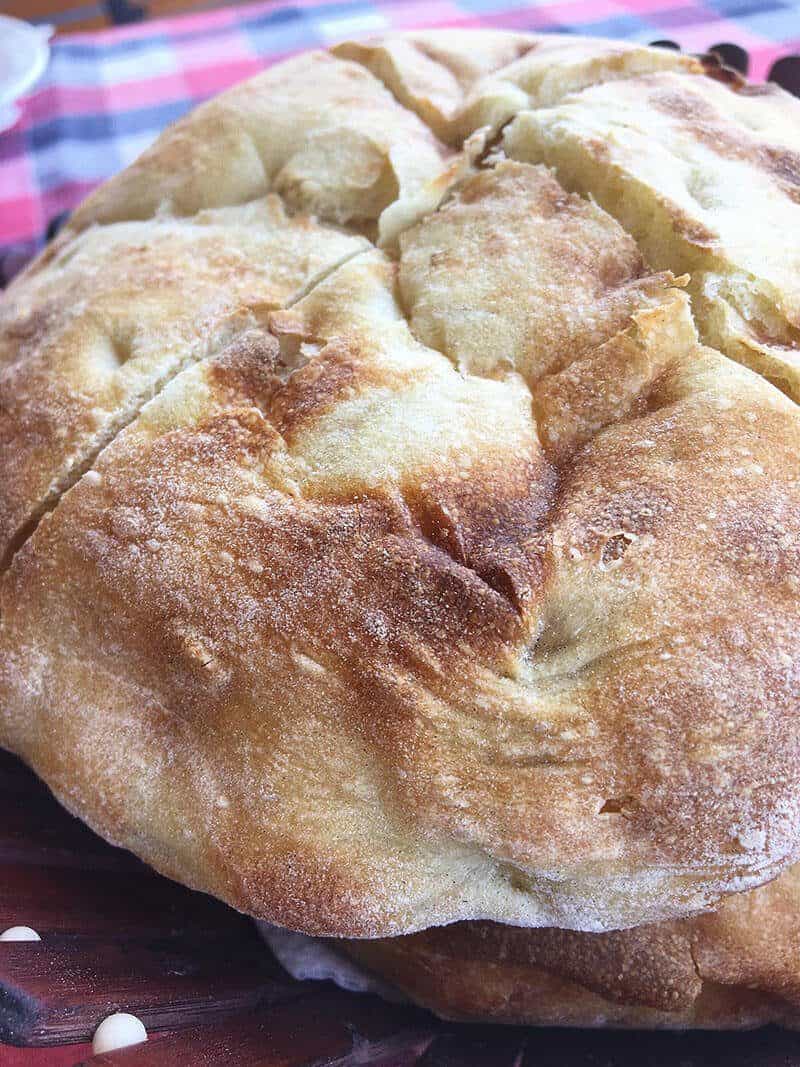 I don’t think I’ve ever mentioned bread in a food post before- that should tell you how good this is. Bread is usually just bread, but simite is something different.

On the inside, this bread is incredibly fluffy, but has an outer crust that is just chewy enough. It’s perfect for dipping or even for stuffing to make sandwiches.

We decided the mark of a good restaurant was whether the simite came to the table hot. The bread is immeasurably better when served hot.

You’re going to need something to dip your simite in, and salcë kosi is one of my favorite choices. 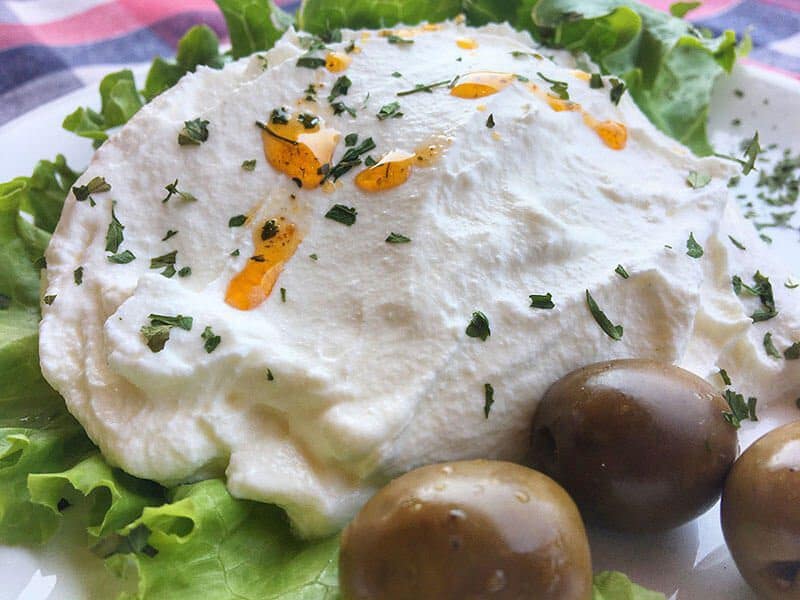 This dip is a strained yogurt that pairs perfectly with grilled köfte and hot bread.

Albanian mixed grill: Across Albania, one of the most popular meals is a big plate of mixed grilled meat, most commonly found at a zgara, or grill house. 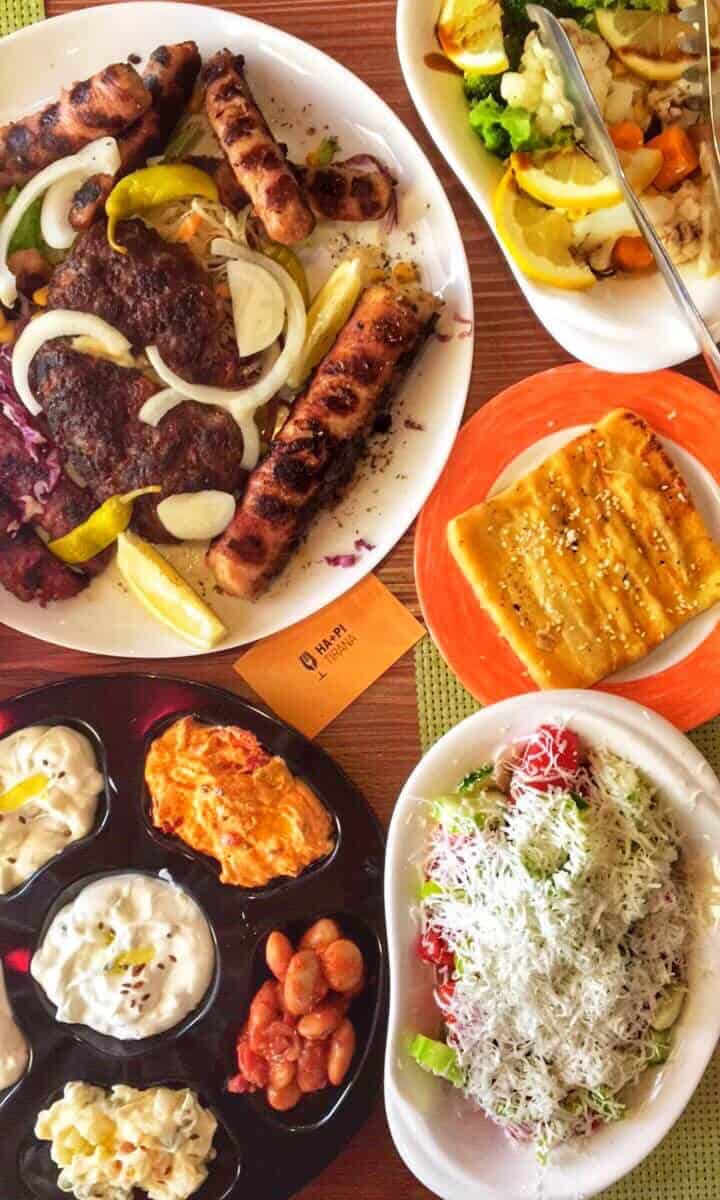 You typically order a salad, some grilled vegetables and an assortment of dips and spreads with this meal, and everyone digs in family style.

This was one of my favorite ways to eat during my stay, because it allowed me to try many Albanian foods at once.

Finally, at the end of nearly every meal, you are typically served (oftentimes without being asked) a small glass of raki. 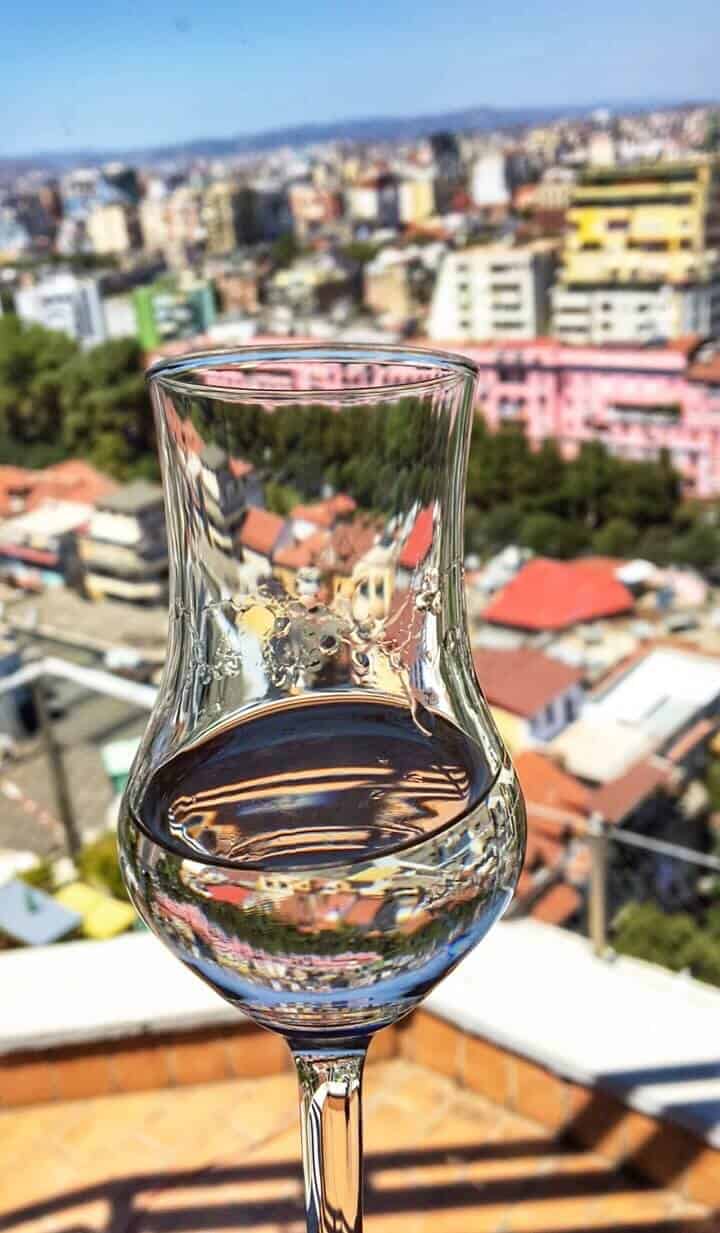 Raki is very similar, if not the same as rakia, which is found all over the Balkans.

The drink is also similar to the pálenka we enjoyed on our walking food tour of Budapest. It is made of fruits such as plums or grapes and is typically clear unless it’s been aged in wooden barrels.

While it goes down like fire, it’s a typical way to end an Albanian meal, and after a few times, you almost start to get used to it!

What looked best to you– which Albanian food do you most want to try? Let me know in the comments section below!